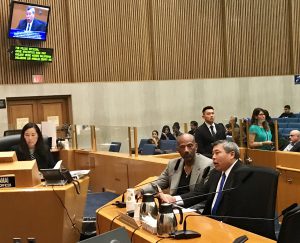 We have good news to report from the LA County Board of Supervisors meeting on August 17, 2017. The motion to create a Blue Ribbon Commission to address the impact of Props 47, 57 and AB109 was officially APPROVED.

PPOA is extremely grateful to our members who joined us in speaking to the supervisors about the importance of this commission. As you know, the reform laws in question have resulted in the release of criminals into our communities and, ultimately, higher crime.

We are also thankful to Supervisors Kathryn Barger and Janice Hahn for co-authoring this much-needed motion. The impetus behind it was the February 2017 murder of Whittier Police Officer Keith Boyer at the hands of a hardened criminal who should have been in prison, NOT on the streets.