Search
Assembly Bill 931 sought to strike decades-old settled law regarding the use of force by peace officers and, put simply, was one of the most anti-police, anti-public safety bills in the history of the California Legislature. Given the current sentiment in the California Legislature, its prospects for passage bordered on the inevitable.
Last night, however, the bill was declared officially dead for the session — something that many Capitol observers view as a huge upset win for the good guys.
PPOA was one of the first organizations to come out against AB 931. Throughout the legislative process, PPOA was visibly active in persuading legislators of the dangers of AB 931. We created a daily floor alert sent to all legislators (see below) and our fellow police associations joined us in that effort to inform lawmakers about the officer-safety risks associated with AB 931.
“We are grateful that the state legislators recognized the negative impact this bill would have had on public safety.” states Brian Moriguchi, president of PPOA and the CCLEA (California Coalition of Law Enforcement Associations). “This bill was nothing more than a hit-piece against police officers motivated by anti-police groups and legislators. If passed, it would have significant reduced public safety and placed officers at greater risk.”
Throughout the process, we focused on Senators who had a demonstrable pro-law enforcement track record in attempting to show Senate leadership that the bill lacked the requisite votes to even pass the Senate. We need to give major credit to Senator Cathleen Galgiani for her invaluable help to defeat this bill. PPOA is also extremely grateful to our Legislative Representative, John Lovell, for his tireless work to prevent this legislation from becoming law.
We have won a major battle, but there will be another bill like AB 931 next year. PPOA will be actively working with our brother and sister law enforcement organizations in order to be prepared for what we know will be a replay of efforts to place officers in danger. 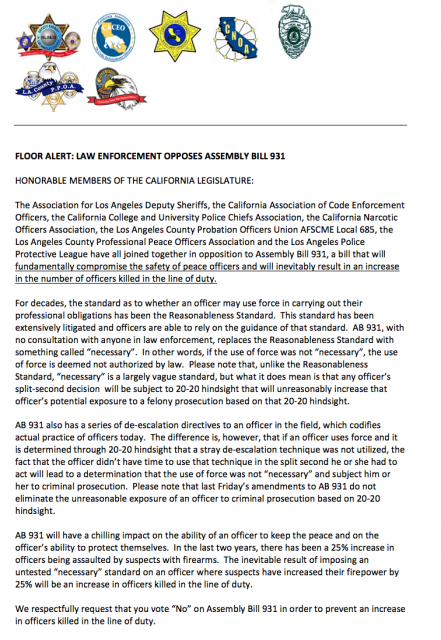