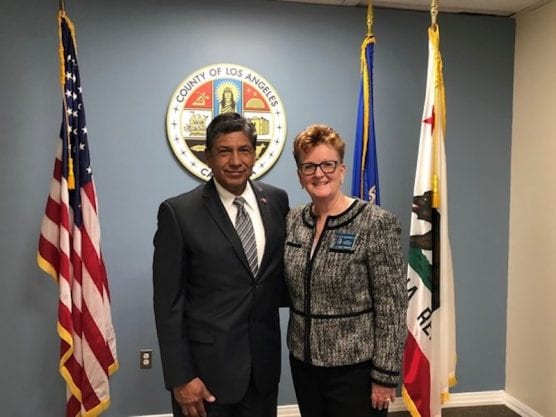 On Friday, Jan. 17, Ray Leyva began his tenure as Interim Chief Probation Officer of the Los Angeles County Probation Department after being appointed to the position by the L.A. County Board of Supervisors on Jan. 7.

Leyva brings with him more than 40 years of distinguished, results-driven leadership working in public safety. He replaces Chief Terri L. McDonald, who has served as Los Angeles County’s Chief Probation Officer for the past three years and is retiring from County service.

“The Los Angeles County Probation Department is a significant Department, one that provides excellent services with dedicated employees and I’m honored to be the Interim Chief. I look forward to continuing to build on the successes and opportunities of the Department so that we may continue to make positive impacts on the lives of those we serve and the communities we continue to help keep safe,” said Chief Leyva.

Chief Leyva most recently served as Undersheriff in the Los Angeles County Sheriff’s Department (LASD). He began his career as a reserve officer with the Los Angeles Police Department in 1975, leaving the LAPD to work as a police officer for the Burbank Police Department in 1976. In 1981, Leyva transferred to the Sheriff’s Department, and in an over 35-year career with LASD, developed and managed critical incident management teams, established policies and procedures, as well as collaborated with unions, media and other public entities. Some of his notable assignments include serving as Captain of the Court Services West Bureau; the Sheriff’s Headquarters Bureau where he was responsible for the Office of the Sheriff and all media interaction for LASD; Men’s Central Jail; and Pitchess Detention Center North and East Facilities. He was also Commander of Field Operations Region I, where he was given functional supervision over the patrol stations located in Palmdale, Lancaster, Crescenta Valley, Altadena and Temple, and North Patrol Division, covering the Santa Clarita Valley, West Hollywood, and Malibu Lost Hills.

“I worked with Ray during my time at the Sheriff’s Department, and I am confident that under his leadership, this Department will continue to set the standard in our work with clients and the community,” expressed Chief McDonald. “Saying goodbye is rarely easy, but I am more than confident that I am leaving this amazing Department in capable and supportive hands.”

Chief McDonald served as the Department’s Chief Probation Officer since 2016, overseeing many progressive changes in both the juvenile and adult operations of L.A. County Probation.

Under her tenure, Chief McDonald oversaw the opening of Campus Kilpatrick, a world-class residential treatment facility based on the L.A. Model of small group, trauma-informed therapeutic care for youth in Probation facilities. Chief McDonald supported the closure of six juvenile camps and Los Padrinos Juvenile Hall, thus closing a $40 million budget deficit while better-utilizing staff and operational resources. She worked tirelessly with the Governor’s Office, the L.A. County Board of Supervisors, and other partners to secure a $5 million grant to move forward with the conversion of Camp Gonzales and Challenger Memorial Youth Center into residential, vocational training facilities for transitional age youth. She supported the establishment of public-private partnerships to expedite the utilization of Juvenile Justice Crime Prevention Act funds for critical and much need programs and services for youth populations and investment in diversion programs to keep youth out of the juvenile justice system.

On the adult services side of the Probation Department, Chief McDonald shifted $180 Million toward the Office of Diversion and Reentry (ODR) to create and deliver services for over 11,000 adult probationers as well as partnering with ODR to expand the mental health court program that removes mentally ill inmates from the jail and provides them with intensive case management and supportive housing. She provided support for Probation’s inaugural reentry symposium which hosted over 900 participants and for the Department’s first of its kind reentry center where clients can receive services to help get them on their feet. Following the lead of the Board of Supervisors, Chief McDonald and Probation actively planned for bail reform to address the issue of equity, favoring a more individualized approach to bail and less on a person’s ability to pay.

The Los Angeles County Probation Department has over 6,100 employees serving more than 80,000 juveniles and adults who are currently on probation in the County of Los Angeles.