Victor Clay, a law enforcement professional with more than 35 years of experience and an unwavering commitment to building strong bonds with the communities he has served, has been named the next chief of the Harvard University Police Department (HUPD). Clay’s career is marked by a record of commitment to diversity and inclusion and support for mental health services. His appointment will take effect on July 26.

“At a moment of national reckoning about the relationship between police departments and the communities that they serve and protect, we are thrilled to welcome a leader who understands the challenges and opportunities of reimagining public safety,” wrote President Larry Bacow and Executive Vice President Katie Lapp, in a letter to the University community today announcing Clay’s appointment.

“…We hope you will join us in welcoming Vic to Harvard and in offering him the advice and support he needs as he works to ensure that every member of our community feels — and is — safe and secure. We are deeply grateful to the many people across the University who offered invaluable thoughts and advice over the course of the search. We look forward to working together as a community to bring about thoughtful and sustainable change on our campus.” 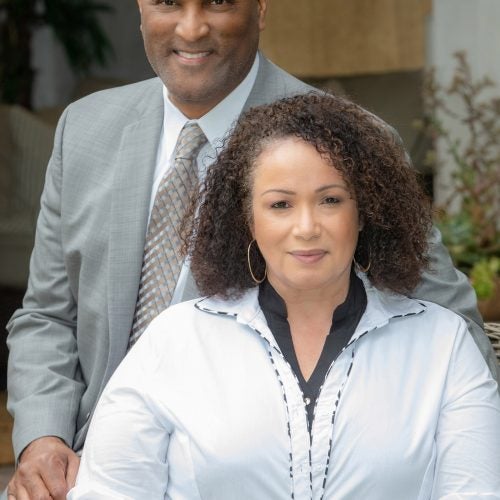 Clay is currently chief of campus security and parking services at the California Institute of Technology (Caltech), his second job in higher education after a stint as head of campus security at Occidental College. Prior to that, Clay spent nearly 30 years in the Los Angeles County Sheriff’s Department (LASD), where he achieved the rank of lieutenant and was awarded the LASD meritorious conduct medal.

“Law enforcement is relationships,” said Clay. “And I’m looking forward to coming to Harvard, getting to know students, faculty, and staff, and hearing from the diverse individuals that make up this University. I also look forward to addressing, with the help of the community, some of the difficult questions facing law enforcement today, and to working together to determine how we can most effectively collaborate, to achieve the Harvard community we want to be.”

Clay began at Occidental in 2014, moving to Caltech three years later. There he quickly developed a reputation as a prominent, respected, and approachable member of the campus community. Professor of Biochemistry Bil Clemons, who worked directly with Clay on diversity initiatives at Caltech, said that what was most notable in their interactions was Clay’s commitment to students and to student organizations, and understanding their perspectives and needs.

“You’re getting somebody who listens,” said Clemons. “Chief Clay is a Black man who entered the police force during a difficult time in Los Angeles’ history. He’s this incredibly nuanced person who understands many perspectives. He’s changed security for the better during his tenure at Caltech and re-centered the department to focus on people and relationships. He’s said, ‘My job is to be part of and protect the community, not to police it.’”

Jennifer Howes, Caltech’s assistant vice president for student affairs and wellness, said that Clay worked directly with her staff to train security officers on issues related to mental health from the beginning of his time there. Clay was also a founding member of Caltech’s CARE team, the institute’s behavioral intervention group, which worked to identify the appropriate resources for students who were in distress. And they both worked together as members of the institute’s Crisis Management Council and Emergency Operations Center, and on a new special-response program at Caltech, staffed by EMT-trained officers who worked with students under both mental and physical distress.

Howes recalled that during moments when there was a death in the tight-knit Caltech community, Clay showed a unique compassion to students, faculty, and staff.

“Vic has been a calm and sensitive presence during these difficult moments, while also making sure that the job gets done from the security side,” she said. “On a college campus, those people who work in student affairs and those who work in security often have very different roles. Vic understands both in a way that I think is unusual when you think about law enforcement. The impact of that has been personally very helpful to me, as we’ve worked together to manage some really challenging situations over the last few years.”

According to Clay’s sister Yolanda, compassion has been a part of her brother’s character for as long as she can remember, and even before that. As family lore has it, when she was born, Vic, 5 years old at the time, stood guard over his baby sister to the point that it was very difficult for family members to get any time with her. She also recalls a time when both were in elementary school, and she lost her purse on the bus. Vic waited for hours at the bus stop to see whether the purse turned up.

“When I think back to that story,” said Yolanda, “it makes me think about why Vic went into law enforcement. To help people. That’s who he is.” This sense of character and the leadership he exhibited was enough to help persuade Yolanda that she wanted to follow in the footsteps of her one and only older brother and enter law enforcement, eventually serving a long, illustrious career in the LASD and retiring as a lieutenant, just like he did.

Throughout his career at the LASD, Clay served in diverse towns and cities across Los Angeles County. But no matter where he was, one thing was constant — his commitment to being an active part of the community he served.

“Victor has worked from the sea to the mountains and over the mountains into the desert,” said Bill Martin, a former colleague of Clay’s at the Black Peace Officers Association of Los Angeles and at the LASD. “But no matter where he was, Victor was predicated on meeting people where they are: You have to listen; you have to pay attention; you have to build consensus.”

Gregory Powell, Clay’s second-in-command at Caltech, says his boss’s commitment to get out, do the work, and engage makes him a great leader. One example: Caltech has had few students on campus due to the pandemic over the past year, and more transients began spending time there. Rather than just moving these individuals off campus, Powell said, Clay always asked them, “What can I do to help you? And he means it.

“We call Chief Clay a working chief, because he’s not afraid to get out with the line officers and do the work,” said Powell. “You’ll catch him out in the field more than you’ll see him in the office. And that’s appreciated across the board.”

Clay is deeply committed to the most important part of the job, added Powell, which is providing students with a safe environment in which to do their work. And he looks forward to seeing how he continues to do so as he moves across the country and begins getting to know his new colleagues. “Once he has a clear view of what the mission is at Harvard,” said Powell, “I have no doubt that he will be able to execute it.”

Clay arrives on campus on July 26, but he has already begun to have initial conversations about starting his work. “I’ve had the opportunity to meet with Chief Clay, and to learn about his philosophy with regard to inclusive leadership in law enforcement, and in particular, how he hopes to begin to make connections across Harvard,” said HUPD Interim Chief Denis Downing. “I enthusiastically welcome him to Cambridge, and I look forward to working with him, and continuing along the path which we have started in reimagining what the HUPD can be.”

Outside of work, Clay’s commitment is to his family and a close-knit group of friends. He will be joined in the Cambridge area by his wife, Teree. Together, they have two adult daughters, Alexis and Aryn.

In a Q&A interview, Victor Clay discusses the current nationwide reckoning on police shootings, diversity and inclusion, community policing, and the role of the police in higher education.