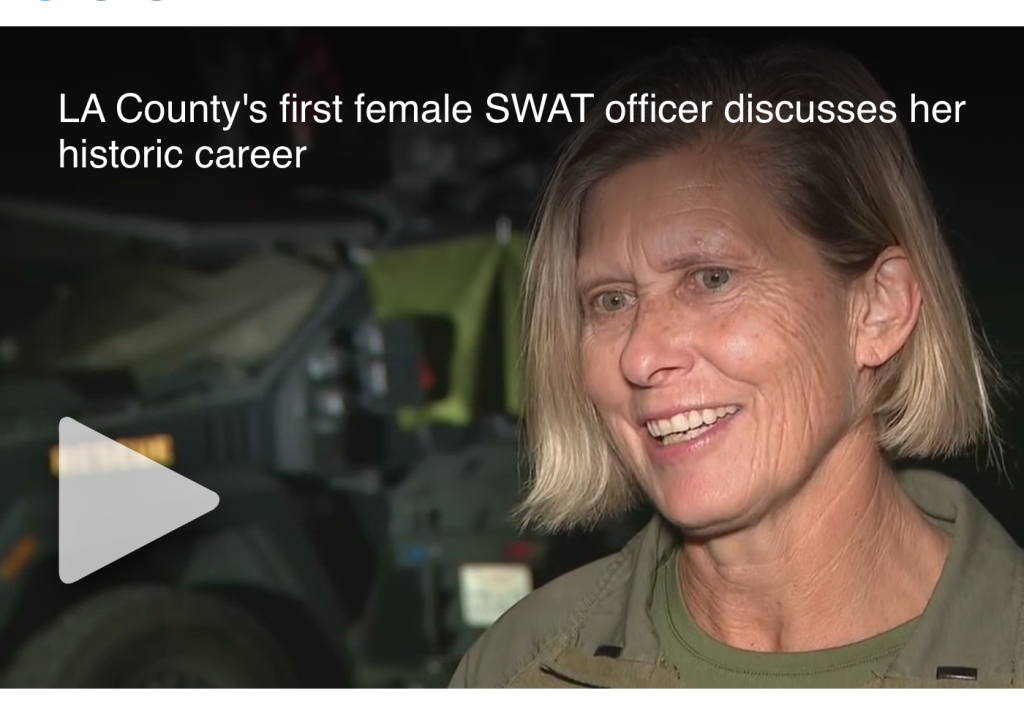 A caravan of armored vehicles, with SWAT deputies hanging off the sides, is surprisingly quiet as it rolls through Southern LA County streets.

It’s just the way Lt. Sue Burakowski planned it. They are on their way to serve a warrant at a suspected illegal casino, believed to be run by a dangerous gang that is known to be heavily armed.

“This is the Sheriff’s Department. Anyone else in the building come out with your hands up,” one deputy calmly says over a loudspeaker.

The surprise raid couldn’t have gone better. There is no tension, we didn’t even see deputies raise their firearms, instead about a dozen people surrender peacefully.

“When you put on the vest and a helmet, it doesn’t matter what’s underneath you have to be able to do the job,” said Burakowski.

Before she was tasked with mitigating risks for her elite team, she was the one suiting us as the first woman on the Los Angeles County Sheriff’s Department’s SWAT team.

She recalls there wasn’t a women’s locker room and bathroom, and admits she didn’t get a warm reception.

“There is fair testing and there’s not fair testing,” she said, recounting how she was sometimes given pointless physical tasks that seemed conjured up just for her.

“Even though it looked absolutely ridiculous and they would never have anyone else do it, I was like, ‘I’m not going to let this beat me,’” Burakowski said.

She pushed back by getting in the best shape of her life, but admits it was sometimes lonely being the only woman.

“I think that was the hardest part was at the end of the day you go to the locker room and you have no one to bounce this stuff off of,” Burakowski said.

Also, like everyone else in her job, the long and odd hours meant she often missed her children’s celebrations.

“My boys are very independent and I’m lucky that way, but they’ve had to,” Burakowski said, “‘I’ve had to come and go.”

But soon, her loved ones will see a lot more of her – because this warrant service was the last of career. After 33 years in the department, including 17 total with the Special Enforcement Bureau’s SWAT, Burakowski is retiring.

“It’s a wrap,” said one deputy as he looked affectionately at Burakowski.

The weight of the moment is clear on her face, her colleagues linger as if they don’t want to say good-bye.

Her team is feeling a little sad too.

“I will definitely be calling her because I could use her advice,” said Sgt. Kevin Brown. “She brings a natural calm to the storm no matter what’s going on with her cool calm temperament.”

He isn’t the only one who is in awe of her. We hear repeatedly how it will be impossible to replace her type of experience and natural abilities.

“I’ll tell you the tenacity it takes to get in the job and to be a leader,” said Commander Bobby Wyche, who marvels at what she has accomplished.

“I know without a doubt in my mind that there were certain things she had to go through. Certain challenges as a woman, you just wouldn’t face as a man,” Wyche adds.

During her career, Burakowski has jumped out of helicopters and also help strategize bomb squad operations, but before she retired, she had another first.

She used her medic skills during the pandemic to vaccinate people who couldn’t leave their homes as part of the department’s Operation Homebound.

“It was probably one of the top five things I’ve done in my career,” she said. “Because it was so rewarding. Caregivers were so thankful, people we came up to were so thankful because essentially, they were trapped in their homes until they could get this vaccine.”

Now, the woman who kicked down doors is leaving also proud of the doors she opened.

“I’ve been able to break a few ceilings here,” Burakowski said. “Talk about time with family. At some point, you have to call it quits.”