As I write this, the news of the tragic helicopter crash that took nine lives, including Kobe Bryant and his daughter Gianna, has shocked the world. Yesterday, memorial services were held for Detective Amber Leist, who was tragically struck by a vehicle as she provided assistance to an elderly couple in a crosswalk. Tomorrow, I will be attending funeral services among many friends and co-workers of 41-year-old Felipe Leal, a husband, friend, custody assistant and PPOA delegate whom I have known for 15 years. 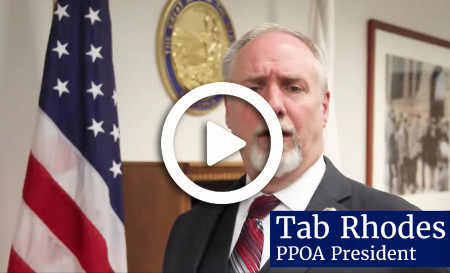 Are you prepared? Do you have a will or trust? Have you updated your beneficiaries?

Our world often becomes overwhelmed by details, day-to-day grind and information overload. Put your family first. Take the time to ensure your family is protected. No one goes out in the morning thinking this is the last day of their life. “It won’t happen to me.” Unfortunately, no one knows when the last day will come, so preparation is key.

Three years ago, my wife and I initiated the family trust process, recording our desires and protecting our family assets should the unthinkable happen. While initiating the process is a great step, this is a living document that must be updated regularly. Among your New Year’s resolutions should be an annual review of your finances and asset documentation.

PPOA is a part of your family’s protection. Representation, bargaining for salary and benefits, legislative advocacy, fighting employer injustices and enhanced voluntary benefits are available to you by being a member of the PPOA family.

Approximately 20 PPOA family members recently experienced the benefits of membership. The January sergeant promotional process and accompanying transfer list reflected a significant injustice. The planned process limited the transfer of tenured sergeants from custody to patrol assignments, limiting the number available for release from their custody obligations to only five of 20.

PPOA, when notified of this blatant disregard for past practice and existing Department policy, immediately objected and began discussions with the Department. A meeting with Sheriff Villanueva and Department representatives was scheduled within a few days. PPOA was represented at the meeting by Executive Director Wayne Quint, attorneys from Hayes, Ortega & Sanchez, and myself. The Department presented its perspective, which upon examination, appeared to be based on a faulty paradigm and misinterpretation of previous court decisions. Soon thereafter, Sheriff Villanueva joined the conversation and was fully briefed of the developments. After further discussion, and over the objections of some Department executives, Sheriff Villanueva agreed that the previous restriction of only five sergeants being released from custody assignments was unfair and restrictive to the careers of other affected sergeants awaiting the opportunity to go to patrol.

Following this decision, Captain McBride and personnel staff worked feverishly with other division personnel across the Department to expedite the transfers. I am very grateful for the favorable outcome of this issue for those involved and hope that the reasonableness and fairness represented by Sheriff Villanueva in addressing our concerns continues to enhance PPOA’s relationship with his administration.

As always, I urge you to get involved. PPOA derives strength from unity and our benefits today are a result of our solidarity. Come participate. Become a union delegate. Our next delegate meeting is on February 25 at 5 p.m. at DeBell Golf Club in Burbank. See what we see — the value of an organization that does everything in its power to protect you, not as union members, but as family members. Thank you for your support and for being a PPOA member!