Around the time you read this, we should be celebrating … our moms! Here is a salute to the many PPOA members balancing their careers, relationships and families.

Moms in law enforcement are forever harmonizing the commitment to their career, supporting their spouse, the long work hours, and of course, being everything to their families. Having spent a couple of years at Century Regional Detention Facility as a Watch Commander, I was in awe of the efforts required for many moms made to come to work. Balancing their own career against their deputy husband’s need to be serving a search warrant during their shift, reporting to work after a sleepless night with a sick child or somehow being expected to be the host of a family function while being drafted the shift before the event at their home, are just a few examples I remember. Moms in law enforcement deserve our respect. 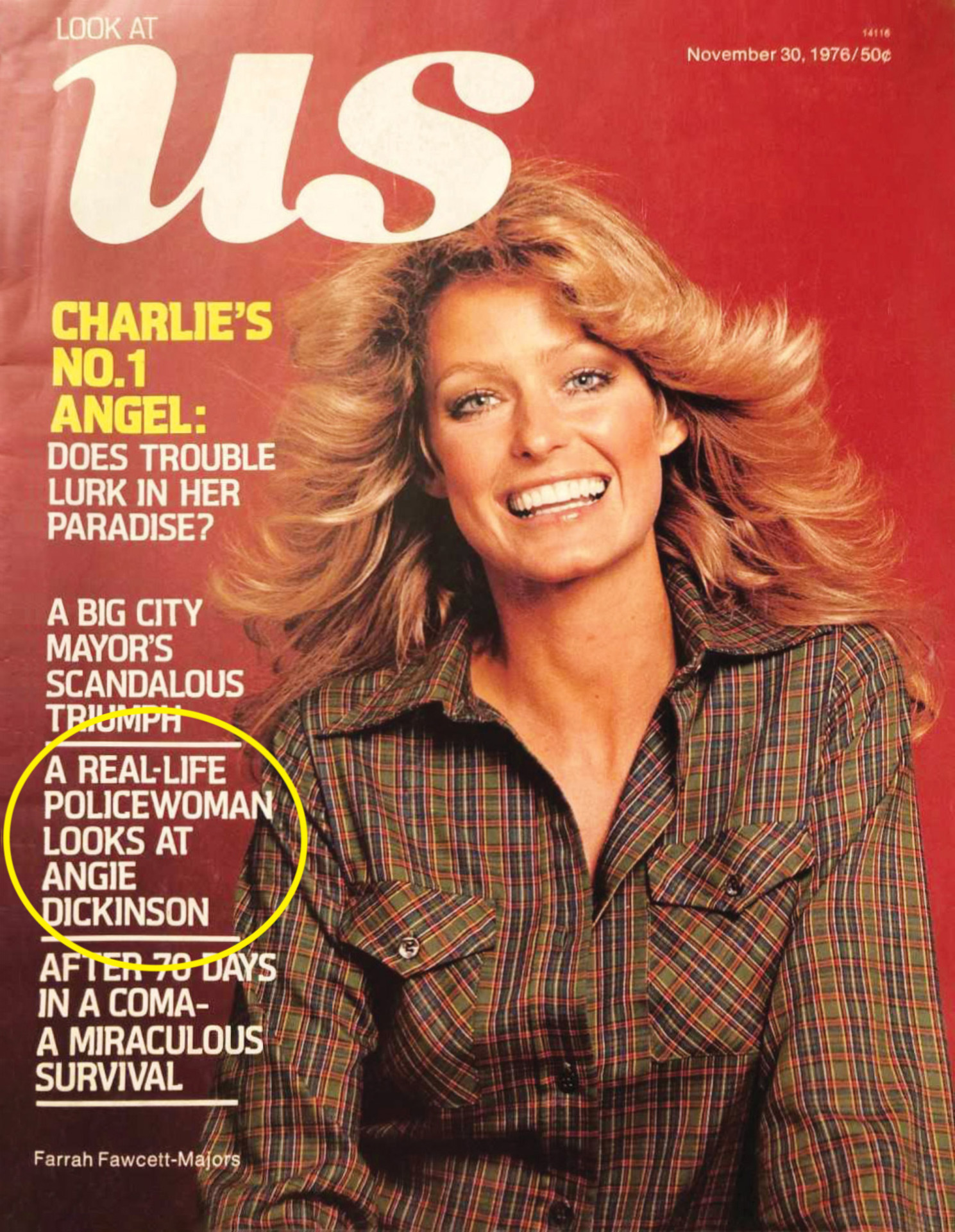 Speaking of one such mother I have the utmost respect for, is my mom, Jeannie Rhodes. Mom, a former LASD Deputy Sheriff in 1968, was a member of Academy Class #125. My father, a 12-year veteran of LAPD at the time, insisted my mother join the “better” Department (further on this later), meaning my mom had to complete a second academy in less than two years, as LAPD did not accept lateral transfers.

At the time, the role of women in law enforcement was definitely evolving. One impressionable memory in my childhood was the day a reporter and photographer came to our home to interview my mom. Turns out, during the highpoint of a television program back in the day called “Police Woman,” a fledgling magazine called Us (now Us Weekly) wanted to do a comparison between fiction and reality. That’s right, my mom, an LAPD detective, was featured in a head-to-head battle with Angie Dickinson in the first issue of Us magazine on the West Coast. 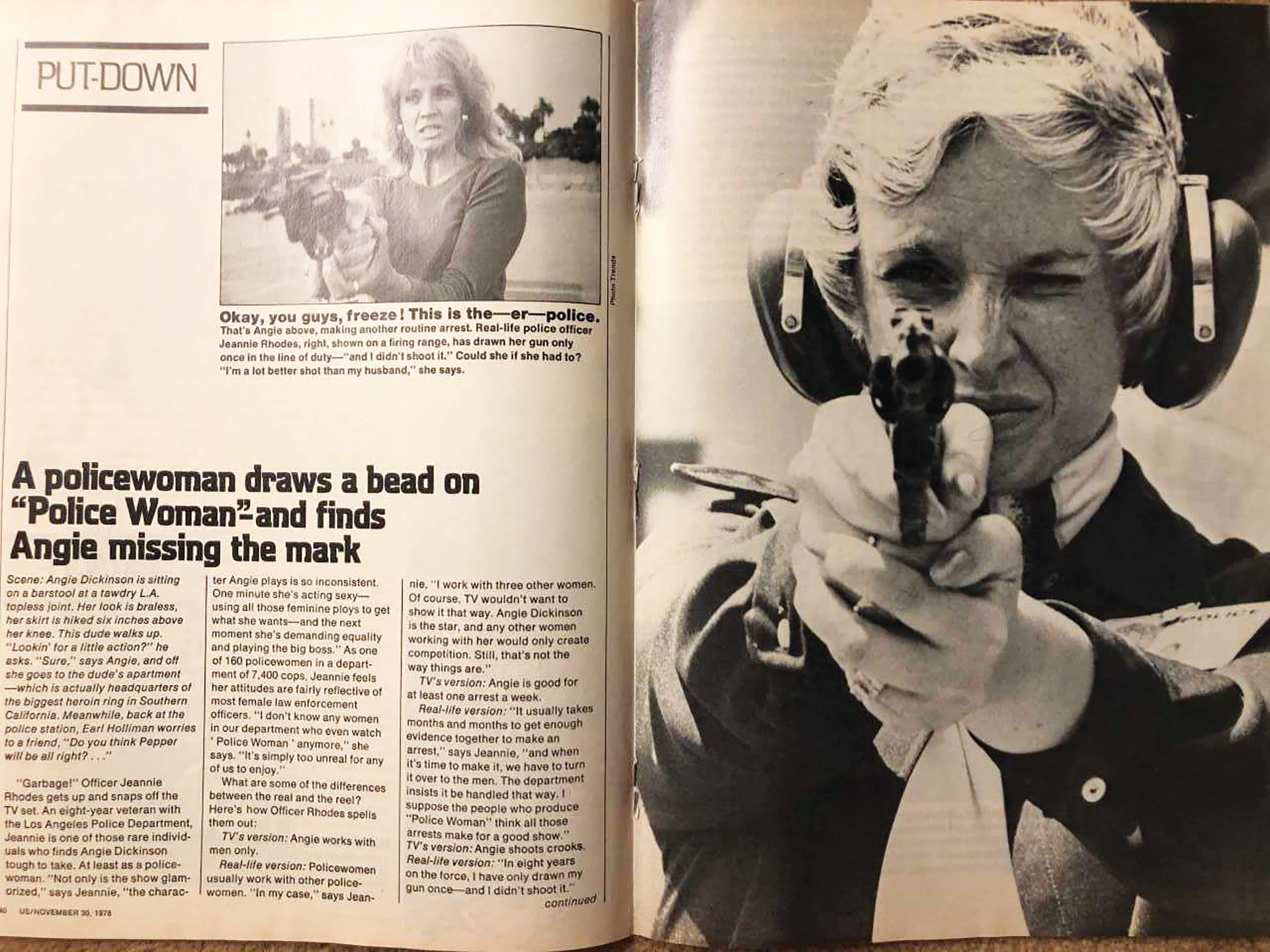 Mom worked many assignments in her 20-plus-year career, including as the first female “Policewoman” (before the name change to Police Officer) assigned to LAPD Metro.  She continued her career as a Detective at Special Victims and Homicide at Southeast Station, ending her career as a Detective III (roughly lieutenant equivalent) at Organized Crime Intelligence Division.

Circling back to the “better” Department comment, it was my mom whose influence brought me to the Sheriff’s Department instead of LAPD. Dad, a proud member of LAPD, was admittedly a little disappointed with me following my mother’s advice and joining the Sheriff’s Department, which “has more diverse assignments, a larger area of which to choose working locations and everyone knows the Sheriff gets it done.” Mom retired in January of 1989, following my graduation from Academy Class #248. Both Mom and Dad are doing great in their lengthy retirement, as they say, “reaping the rewards for as long as possible from the blood, sweat and time given to the citizens of Los Angeles.”

PPOA, always welcoming diversity and encouraging participation, has numerous mothers in our Delegate Team, and two moms on the Board of Directors, Joyce Kato of the Department of Medical Examiner-Coroner (DME) and our newest addition, Nancy Escobedo from the Sheriff’s Department. Joyce, a 26-year veteran of the DME, is married and the mom of three handsome sons (for further information, see our director spotlight article in the last issue of Star & Shield). Nancy, a 24-year veteran of the Sheriff’s Department and mom of three beautiful kids, was just appointed by the Board to replace newly promoted Captain Satterfield, who promoted off of the Board. Please welcome Nancy to the Board of Directors and read her article in this month’s issue for her background and goals as a new Director of PPOA.

I know I mentioned him previously, but for those of you who were not privy to the information, former PPOA Board member John Satterfield recently promoted to Captain of Sheriff’s Information Bureau. John’s wisdom, analysis and experience will be missed in the PPOA Board Room.

While we are updating significant Board of Directors news, I will take the opportunity to inform all about the unexpected resignation from the Board by PPOA Vice President Ryan Vienna. Due to a recent set of circumstances and changes of assignment within the Department, Ryan recognized he could not devote the time and effort he wished to give PPOA because of other personal obligations. We at PPOA wish both Ryan and John all the best in their future endeavors. Stepping into the vacancy created by Ryan’s departure will be Sergeant Jose Rios. Jose, a PPOA Delegate and former member of the BU 612 Contract Negotiations Team, has extensive experience with labor issues and, I am sure, a tremendous wealth of knowledge for PPOA to pull from (for further information, see Jose’s article in this issue).

And finally, this dedication to moms would not be complete without mentioning the many spouses of our members, who love and support them through the trials and tribulations of being involved in law enforcement. Thank you for your dedication, patience, care, prayers, and did I mention, patience? Our success in our careers, and for that matter, daily, is only achievable by knowing we have a strong support system to return to every day — home. Happy Mother’s Day!