PPOA’s former executive director, Paul K. Roller, worked directly with Jim Vogts for 18 years while they represented members of this association. Their friendship goes back much further due to their longtime roles as labor leaders in California. Paul wrote an article for Star & Shield magazine in 2014 that chronicled Jim’s impact as a law enforcement lobbyist and as a friend. Here’s an excerpt.

You all know that Jimmy Vogts is our lobbyist in Sacramento and has been for the last 16 years, but he is so much more than that to PPOA. He was PPOA’s president for three years until a heart attack forced his retirement from the Sheriff’s Department. He was the president of the State Marshals Association, was a founding board member of the California Peace Officers’ Memorial Foundation (and is still an active member) and has been an essential member of PPOA’s leadership team over the past 45 years — as a Board member, an officer, the president, a staffer and our lobbyist. Virtually every important decision made by PPOA over the last 45 years included Jimmy Vogts’ vital input. He is one of the pillars that holds PPOA in place. He is the best of the best and truly PPOA’s indispensable man.

But everything comes to an end, and because of health issues Jim is forced to retire. PPOA is now finishing a four-month search to replace Jimmy. This is an almost impossible task. Jim is one of the key law enforcement lobbyists in Sacramento. Those of you who personally know Jim understand that his 6’4”, 300-pound frame is hard to miss — and his personality is even bigger than that. Sacramento legislators who don’t know Jim’s name still know that he is the “cop” lobbyist, a force to be reckoned with, and somebody who knows the truth and is not afraid to tell it! 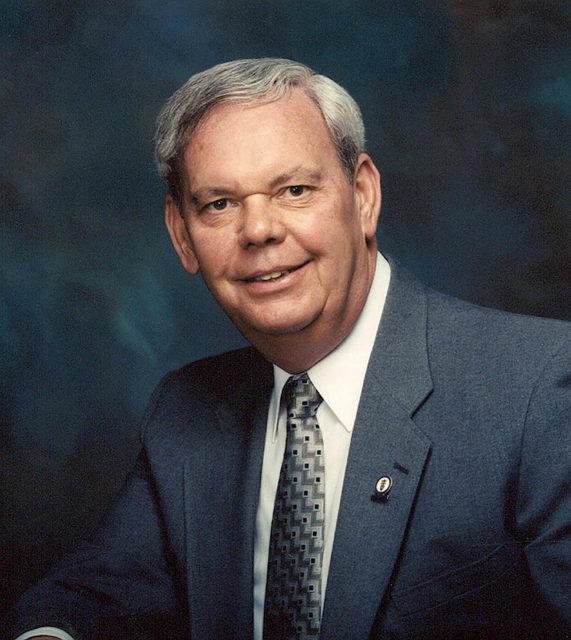 Jim has spent the better part of 40 years walking the halls of the Capitol building and has earned an unparalleled reputation as a fantastic advocate for peace officers in the state of California. It is not an overstatement to say that all peace officers in California — past, present and future (not just PPOA) — can never repay Jimmy for his work on their behalf.

I know that I personally cannot repay Jim for his advice and counsel, for his friendship, for his sense of humor and for being a wonderful traveling companion over the past 15 years. Jim and I have spent many hours together on planes; in hotels, bars and restaurants; in offices for legislators, congressional reps and senators; and in meetings representing PPOA, IUPA and the FOP on issues vital to law enforcement officers. The time we’ve spent together has always been educational and entertaining, and our numerous conversations have taught me much about Jimmy Vogts. I know that James Vogts was born in Georgetown University Hospital in Washington, D.C., on February 12, 1943. His mother worked on the Hill for Senator Hubert H. Humphrey, who years later would become vice president of the United States. During his time at a Catholic high school in Washington, D.C., Jim excelled in football and, probably because of his mother’s influence, became interested in politics at an early age. He became a page for Senator Estes Kefauver (who was the nominee for vice president in 1956 as the running mate of presidential candidate Adlai Stevenson). During his time as a Senate page, Jim went to school on the upper floor of the Library of Congress!

After high school, Jimmy joined the Army and was a member of the military police (MP). When he was mustered out, Jim followed his older sister to California. She had come to California to compete in the Miss America Pageant as Miss Maryland and stayed here after she got married. Jim got a job with the L.A. County Marshal’s Office, where he rose to the rank of sergeant — a rank he held with the L.A. County Sheriff’s Department after the merger. As a marshal, Jimmy ran for and won a seat on PPOA’s Board of Directors, and he has been with PPOA ever since.

Jim has been married for 40 years to his wife, Debbie (who has to be a saint!), and they have two daughters and a son. Jim’s older sister still lives near him in Palm Desert and he has two other sisters back East. Unfortunately, Jim lost his father a few years ago. They are all great people and a testament to Jim’s love of home and family. There is another aspect to Jim that many do not know. Jim remains a dedicated Catholic who attends Mass every week. This includes attending Mass wherever he is traveling in any state. He is very dedicated to his faith. I also know that there is no finer tour guide of Washington, D.C. Jim’s love of his hometown is shown through his pride in leading anyone around D.C. His knowledge of politics, history, places of interest and numerous unknown facts about Washington is unmatched.

These are just a few of the things that Jim has shared with me over the years and some of the things I have learned from him. (Jim, forgive me if I’ve gotten anything wrong in the retelling.)

But most of all, I have learned that James Vogts is a great man. That Jim is an honorable man. That Jim is honest, hardworking, respected, funny as hell and absolutely irreplaceable to PPOA. Sure, Jimmy wants to be (and thinks he can be) PPOA’s lobbyist, president, executive director, retiree board member and No. 1 decision maker all rolled into one (and on top of that, the bride at every wedding and the corpse at every funeral!). But he has earned that right because of his 50 years of great service to PPOA. There will never be another Jimmy Vogts — he is truly one of a kind and I am glad I have the chance to tell him while he is still around to hear it.

Thank-you, Jimmy, for all you have done for PPOA, and thank God for sending you to us!