Have you ever awoken recently and just asked yourself, “Why bother?” Are there more days where you feel like, “Why do I go to work?”

The stress of this ongoing COVID-19 pandemic, the hope of its finality dashed by surges threatening our health, as well as the obvious mainstream media and activist attacks on our chosen calling are horrendous. Now more than ever, American society and each of us personally are being challenged to evolve or fail. We are truly at a turning point in history, and as a result, we must each make a choice.

Interestingly enough, while writing this article, I was thinking about society’s FEAR. From that thought, and a very brief research project, I was led to the 1933 inaugural address of President Franklin Delano Roosevelt. Many of his points are still relevant today.

“… This is preeminently the time to speak the truth, the whole truth, frankly and boldly. Nor need we shrink from honestly facing conditions in our country today. This great Nation will endure as it has endured, will revive and will prosper. So, first of all, let me assert my firm belief that the only thing we have to fear is fear itself — nameless, unreasoning, unjustified terror which paralyzes needed efforts to convert retreat into advance …”

Now more than ever, heroes are needed. You are needed! Do not let these difficult times and fear dictate your actions. Stay true to yourselves and the honorable calling you have chosen.

Roosevelt continued to speak on the common financial difficulties people were facing following the stock market crash of 1929, which left the country’s economy in ruins.

“… Values have shrunken to fantastic levels; taxes have risen; our ability to pay has fallen; government of all kinds is faced by serious curtailment of income; the means of exchange are frozen in the currents of trade; the withered leaves of industrial enterprise lie on every side; farmers find no markets for their produce; the savings of many years in thousands of families are gone.

“More important, a host of unemployed citizens face the grim problem of existence, and an equally great number toil with little return. Only a foolish optimist can deny the dark realities of the moment.

“Yet our distress comes from no failure of substance. We are stricken by no plague of locusts. Compared with the perils which our forefathers conquered because they believed and were not afraid, we have still much to be thankful for …”

Do these unprecedented historic times not present similar problems in our society today? Homelessness, the end of rent/mortgage moratoriums, skyrocketing housing costs, reform of systemic racism and accusations of police brutality, all play into society’s anxieties.

While everyone’s feelings should be respected, society cannot control individual feelings. For American society to survive these issues, we must not FEAR. As I have been recently reminded, the acronym FEAR stands for “false evidence appearing real.” Do we not see that in every mainstream news story looking for ratings? Is it not spread on social media by “influencers”? Are not many elected officials placating their new positions to that same false evidence, perpetuating anomalies and feelings as “systemic” facts?

Recently, the L.A. County Board of Supervisors passed an agenda item again asking for more authority to be given to the Office of Inspector General (OIG). This motion was authored out of response to the OIG report titled “Report Back on Protecting Surviving Families from Law Enforcement Harassment and Retaliation.” This eight-page report contained only three pages of vague statements from survivors of those who died in violent confrontations with law enforcement. These unsubstantiated and obviously biased statements became a representation of systemic harassment of families. During the hearing, certain county supervisors insisted on calling those who had passed “victims” and/or “those murdered by law enforcement.”

The Board of Supervisors doubled down on its contempt for law enforcement and its support of these surviving family members by including in the motion a request “to identify ongoing funding necessary to continue the Board’s established Family Assistance Program to support families following an in-custody death or fatal use of force by law enforcement.”

When a law enforcement officer is involved in any significantly violent event, it is life changing. When I joined the Sheriff’s Department, I was welcomed into the County family as well as the law enforcement profession. Where is the support from the Board of Supervisors for its own County family members? Is there a special program to help the families of law enforcement officers who suffer from the effects of a fatal shooting? A program to assist with the nightmares, PTSD, isolation from family and friends, alcohol abuse, and let’s not forget the obnoxious and sometimes violent protesters in your front yard? Where is the support for the persons who run into the line of fire, who face violence and possibly death, out of their dedication to the community? Twenty years ago (anyone remember 9/11?), law enforcement officers were heroes … now we are martyrs to be sacrificed by the court of public opinion.

Because of FEAR, now more than ever, heroes are needed. You are needed! Do not let these difficult times and FEAR dictate your actions. Stay true to yourselves and the honorable calling you have chosen. Believe in yourselves. We are the sheepdogs, not the wolves. Trust in your training and conduct yourselves as the professionals we all know you are. Don’t listen to the rhetoric. The community values you, no matter what the internet/media would have you believe. Change the acronym of FEAR into “face everything and rise.” Heroes are needed.

PPOA has now been here for the last 70 years, supporting our membership. We will continue to support our members through these difficult issues. As a valued PPOA family member, should you be in need of assistance, please reach out. 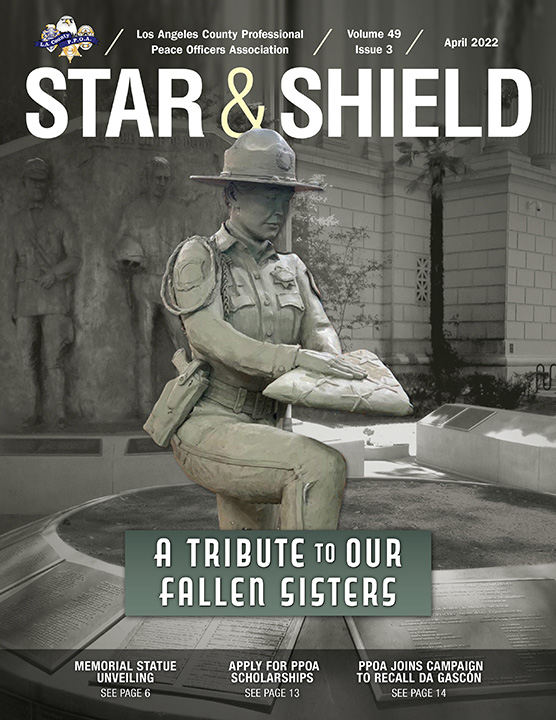