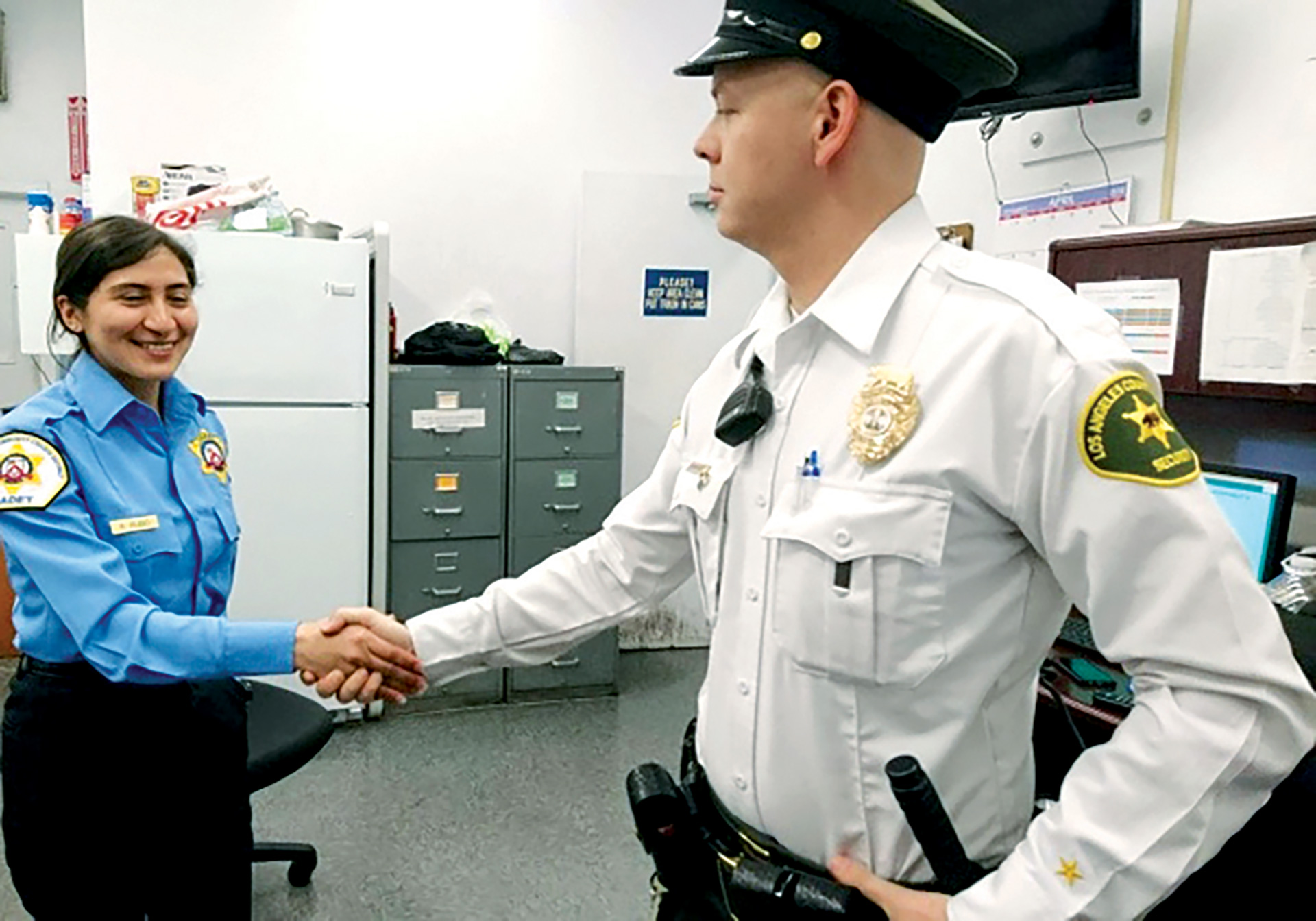 On March 17, the Sheriff ’s Department lost one of its most dedicated family members. If you were lucky enough to know Lars Burkhardt, you understand that he was more than an employee, more than a security officer, more than a proud PPOA delegate. Lars was the friend you could always trust, the partner who was always reliable and had the positive attitude (even while battling cancer) that always inspired those around him.

We will all miss Lars. Ask just about anyone who worked with him and they will describe him with terms like “class act” and “positive impact.” He made it a point to help anyone he could, however he could (with advice, encouragement, etc.), and was always looking for ways to improve our classification. His care for others was genuine.

I am proud to announce that PPOA has decided to award a scholarship this year in honor of Lars and in recognition of his generous spirit. We’ll have more details about that in the near future. Meanwhile, I want to share some thoughts about Lars from those with whom he worked. We have space for only a few, but I know many others have heartfelt stories about Lars’ impact, as well.

“Burkhardt was a very smart guy. He always had the answer for any question you had, work-related or not, and if he didn’t at the moment he would do his research and get back to you about it. I remember when I first began at Trade Tech I was speaking to one of our cadets in Spanish and he responded to me perfectly in Spanish! I was so surprised how fluently he spoke Spanish! He was one of those officers that you knew you can count on and he loved giving advice to everyone, especially when it came down to food! He always made sure he looked sharp before beginning his shift, and honestly I have never met someone who can keep their Class A white shirts so clean and so white like he did! Burkhardt will truly be missed by all of us.”

“SO Burkhardt was diagnosed with a rare form of cancer at 29 and fought hard to the very end. I had a chance to speak to him a couple weeks ago. I told him I loved him and that our relationship transcended the supervisor–employee relationship a long time ago, and he told me he knew that already we were real friends. We would talk forever at work during our downtime. We talked about our favorite subject, watches. We would bring them in to work to show each other and we were both embarrassed about how many watches we had. He was German, so when he went back home or on vacation to other places he would always bring me back something. We talked for hours about food, culture, politics, cars and more watches. I will truly miss this great guy and my heart is heavy about these most recent losses in my life.”

“Lars was very proud of wearing his uniform and was the only SSO wearing his dress hat, probably countywide. He always strived to look sharp while in uniform.”

“Lars was the smile of the party, the optimistic thought in a negative situation and just an amazing all-around person to be around. His time with us was too short, but even with that brief amount of time he was able to leave such a positive impact on all of us that worked with and knew him.” 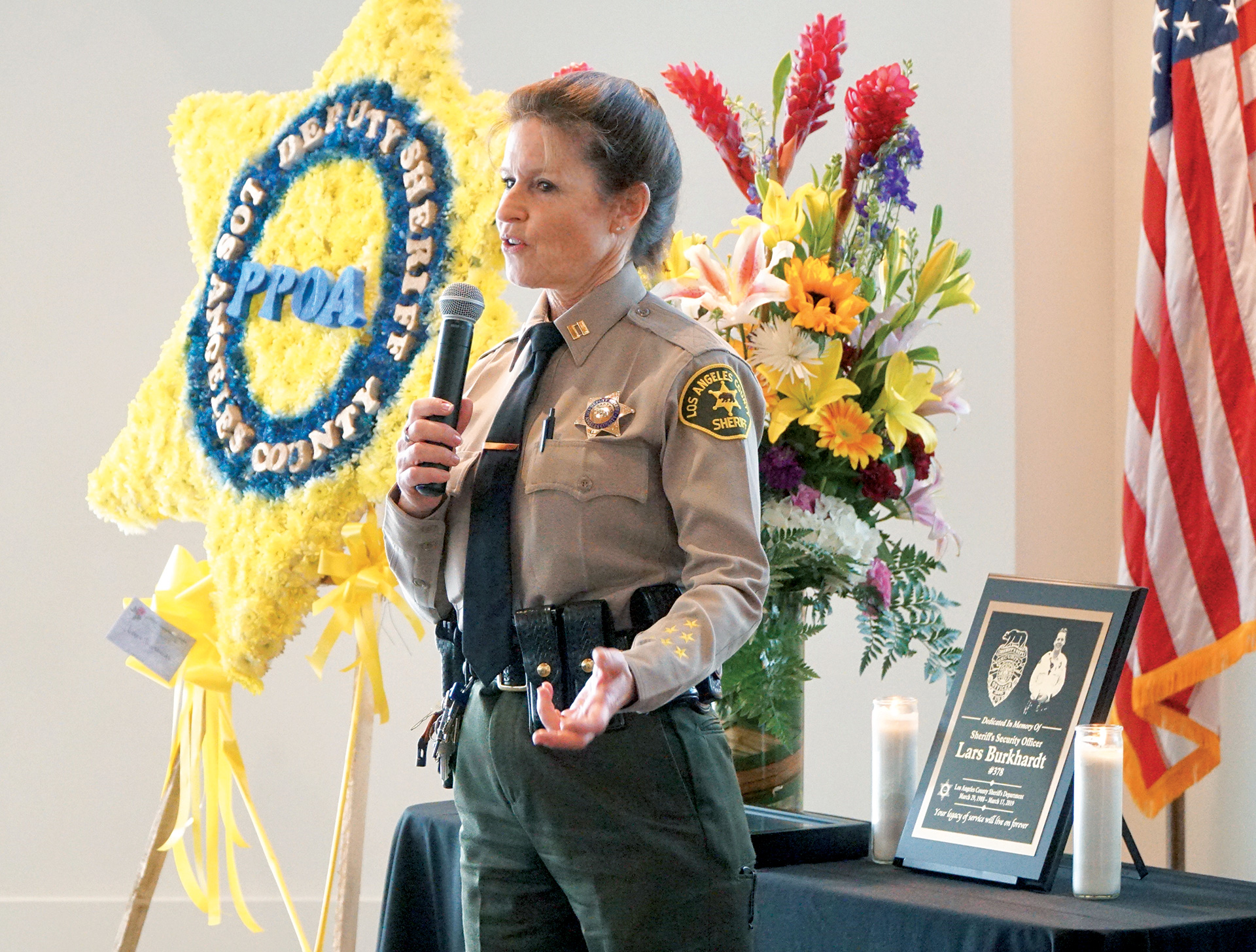 “Officer Burkhardt was a great partner. He always showed up to work on time. I had the pleasure of working with him and saw him set an example of what a security officer should be. He was always very respectful and helpful to all employees at Trade Tech. He always had your back on calls. One thing he loved was eating fancy food. We always talked about the different dishes and places he tried on his days off. He also liked to drink fancy coffees (sometimes too much $$ for my taste). He had a thing for rare and expensive watches and collected law enforcement badges, pins and coins as memorabilia. He will truly be missed here at Trade Tech College. Farewell, my friend, until we meet again.”

“Lars was a great partner. He always looked out for us. He knew when he should hop in to assist and when to let you handle your own business. He taught me a lot, not just about law enforcement, but also about life, and the finer things in life like coffee. And not 7-Eleven coffee, I’m talking about Philz coffee, Urth Caffé coffee, good coffee. The over $6 per cup coffee, and fancy $5 donuts and pastries from Birdies in DTLA. Now my teeth are getting stained thanks to him! Lars always had the hotspot and trendy foodie thing going, no problem spending $20 for lunch on the regular! But seriously, I will miss him. He was a very smart and witty guy that was always ready to make a joke out of a tense situation to lighten the mood. He was always there for me to translate Spanish, and I’m the one of Latin descent! He was fluent in three languages, English, Spanish and his native language, German. Whenever we needed someone to do research on a particular union situation, Lars was our guy. He was very helpful and interested in making the SO position a more prestigious position. He regularly attended the Memorial Services every year up in Sacramento, one of the few officers who attended. He was very much active in the Department and wanted to do more to help. He would even take time to mentor our cadets and help them in any way he could to advance their careers, especially those interested in joining the Department. Again, he will be extremely missed and will always be remembered as ‘our German officer.’”