Following the conclusion of the last regularly scheduled PPOA Board of Directors meeting on July 13, President Tab Rhodes advised that he would be resigning as president. Although the announcement came as a surprise, Tab had been discussing plans to address personal health issues for some time. President Rhodes stated, “On the advice of medical professionals and out of caution regarding personal health concerns, I, Tab J. Rhodes, resign my role as president of the Los Angeles County Professional Peace Officers Association.”

In the interim, and per the PPOA Bylaws, First Vice President Nancy Escobedo will provide leadership and direction pending further strategic and organizational discussions within the PPOA Board of Directors as they work to determine next steps. This orderly transition will be conducted professionally by your resolute and proactive Board of Directors.

When the founding members of PPOA established our union in 1951, their single most important reason was simple and unapologetically honest: to protect the workplace rights of every member. In the 71 years since then, the mission has remained the same, and your Board of Directors will continue to advocate and fight to ensure that every active PPOA member is able to perform their duties safely and effectively.

At the June 13, 2019, Board of Directors meeting, PPOA seamlessly transitioned from our longest-sitting (10 years) president’s resignation by unanimously electing then-Director Tab Rhodes as our new leader. Additionally, this date marked the first seven months of Department leadership under newly elected Sheriff Alex Villanueva, who in November 2018 made his own history by defeating an incumbent sheriff for the first time in over 100 years. 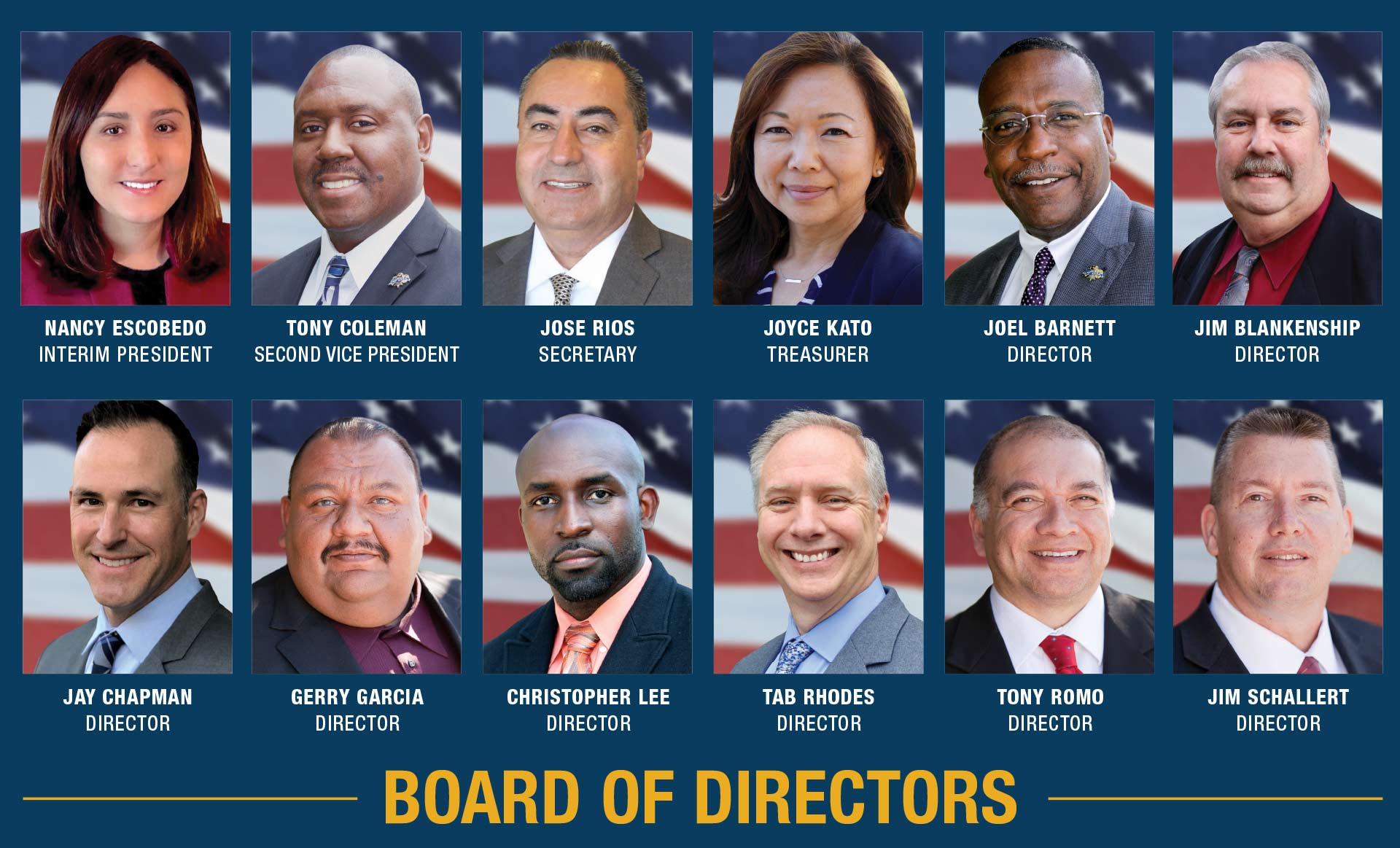 Little did Tab or any of us know that these local historical changes in 2019 would look like child’s play compared to the two unprecedented global events that would occur in March and May of 2020. PPOA was faced with two mega-crises during Tab’s first year of presidency: the COVID-19 pandemic and the death of George Floyd. The fallout from both of these two historical occurrences remains at the top of PPOA’s goals and objectives as we strenuously continue our unyielding focus on protecting the health and welfare of our members in the workplace.

Added to Tab’s three-year tenure, here are a few other public safety labor issues he and the Board addressed and strategized: rejoining the Coalition of County Unions (CCU), which gave PPOA a voice at the bargaining table for all our members’ fringe benefits; the projected COVID-19-related $54 billion shortfall by the state of California; the County’s fiscal nightmare Measure J, which was fast-tracked by the Board of Supervisors onto the November 2020 ballot (passed overwhelmingly although later ruled unconstitutional); the loss of two critical elections (district attorney and Second District Board of Supervisor); ongoing legislative action in Sacramento regarding reform efforts on decertification, the removal of qualified immunity and the elimination of the Peace Officer’s Bill of Rights; and negotiating each of our bargaining units’ (612, 614, 621, 631 and 632) one-year (2021–2022) “status quo” no takeaway contracts.

Tab was the chair of negotiations for Bargaining Unit 612 (LASD/LADA Sergeants/Lieutenants), and on July 7, 2022, the PPOA negotiations team reached a tentative three-year agreement for a successor Memorandum of Understanding (2022–2025) with the County. The PPOA team worked tirelessly to make every attempt to spread available funding to as many members of Unit 612 as possible. Ratification ballots were mailed out on July 15 and will be counted at the PPOA office on Friday, July 29. Although at the time this message was written, the results of the ratification vote are unknown, the PPOA negotiations team unanimously believes that the Unit 612 members will overwhelmingly support the contract.

I really believe that the three years of leadership that Lieutenant Tab Rhodes provided as PPOA’s president should be measured in “dog years.” I want to express my gratitude to Tab’s wife and family for supporting his deep desire to serve the PPOA membership during the good, the bad and the ugly. I am a firsthand witness that Tab strived day in and day out to continue the “Tradition of Success” for the entire membership, and he never forgot the mission of our great union. Thank you, Tab.