After 10 years of dedicated service to the members of the Professional Peace Officers Association, Brian Moriguchi resigned as president at the June Board meeting, citing health concerns. President Moriguchi stated that he had planned on serving in that capacity longer, but felt this was the right time to leave. “It has been a great pleasure serving the PPOA membership over the years,” he says. “I have complete confidence in the new leadership and the Board of Directors.” As the longest-sitting president of PPOA, Brian is known nationwide for his efforts and contributions to PPOA, the Los Angeles County Sheriff’s Department and the law enforcement community. Thank you so much, Brian.

As a result of this sudden revelation, the Board of Directors unanimously elected the current vice president, Lieutenant Tab Rhodes, as the new president of PPOA. In addition, our long-serving secretary, Law Enforcement Technician Jim Blankenship, was elected to be the new vice president, and Custody Assistant Tony Coleman was elected to serve as the new Board secretary. DAI Lieutenant Rogelio Maldonado will remain as treasurer. Past President Moriguchi has graciously agreed to remain on the Board as a director to assist our new president with the transition.

The Board of Directors also took the opportunity to round out the conference table by appointing two new members to fill vacant Board seats. Please join us in welcoming Commander Carlos Marquez (vacancy created by the promotion of Patrick Jordan to chief) and Lieutenant Ryan Vienna (vacancy created by the recent retirement of Sergeant Jim Schallert) to the PPOA Board of Directors. 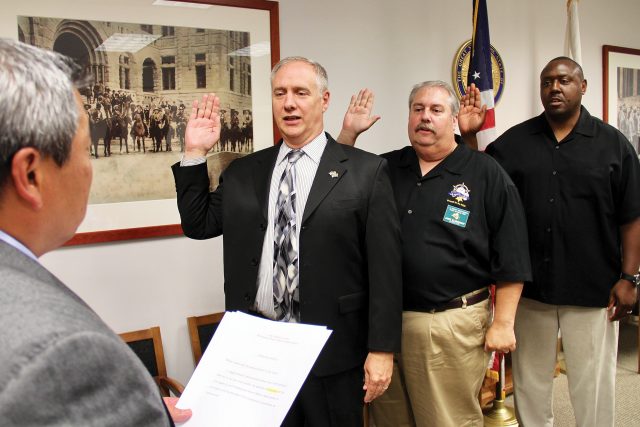