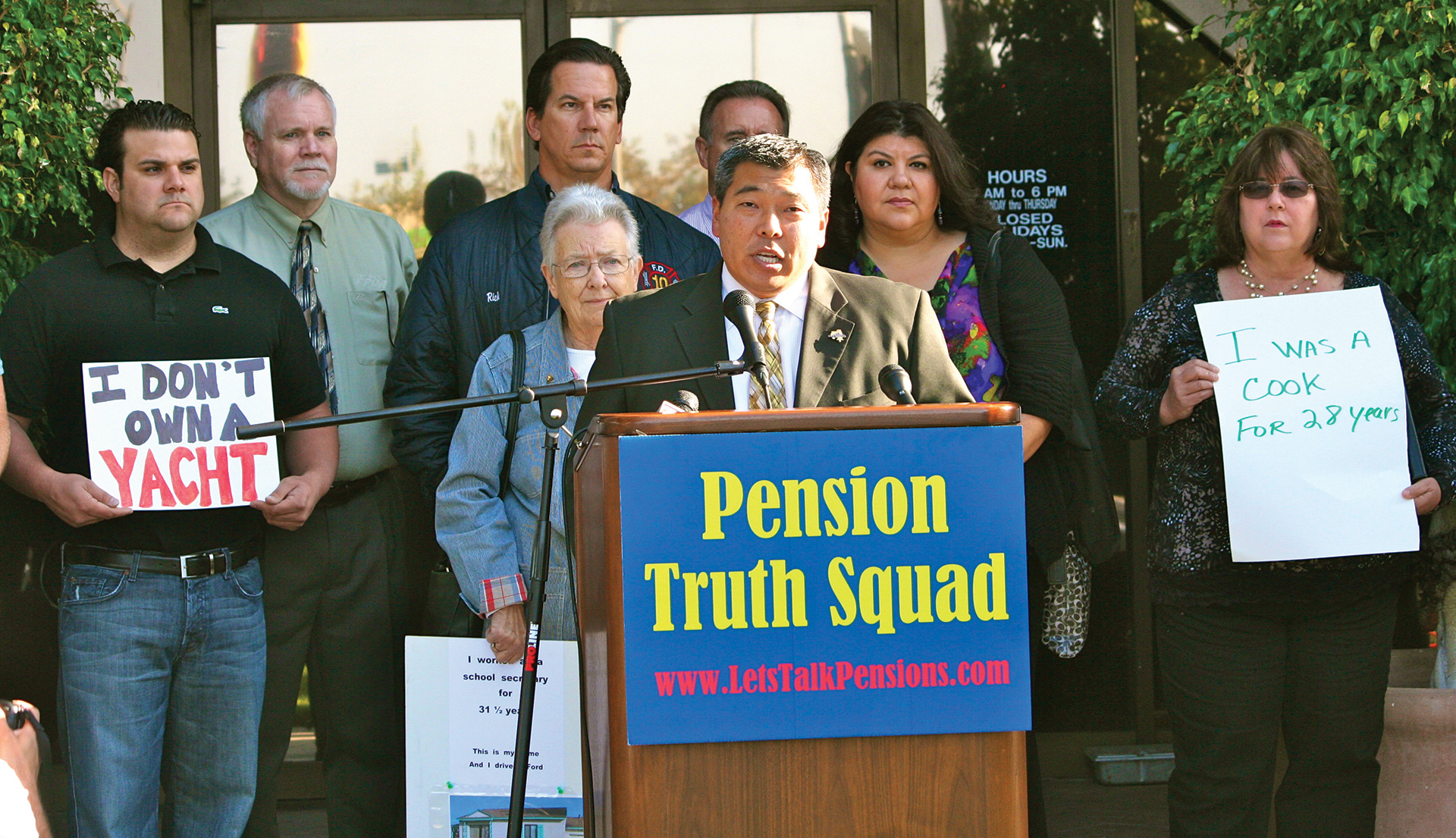 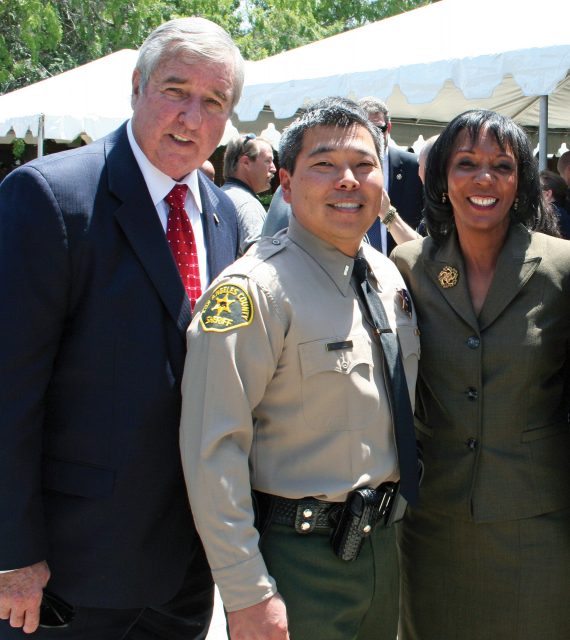 Q: Why did you decide to get involved in PPOA?

A: Like so many other employees, I had a bad experience with the Department when I was a deputy. It’s a long story that involves harassment, retaliation, illegal wiretapping and threats against my life, all from within the Department. I ended up suing the Department and winning my lawsuit. After I won my lawsuit, I was contacted by many employees who had similar experiences. I think that is where I developed a passion for protecting others against abuses of power by the Department and Department executives.

I wasn’t really a “unionist” but I always heard good things about PPOA, so when there was an opportunity to get involved, I jumped at it. I was elected to the Board in 2006 and learned a lot about unions and PPOA specifically. I really liked what I saw and ran for president in 2008.

Q: Why did you decide to become PPOA’s president at that point in your career?

A: I guess the timing was right. I didn’t like what I saw in the Sheriff’s Department and was concerned about the direction it was headed. It was a big decision because I still had at least 10 more years to go before retirement, but I felt I could have the greatest impact as PPOA president, more than even getting promoted.

Q: Did you accomplish your goals as PPOA president?

A: Yes and no. I accomplished some major ones, but there are many I did not. I wanted to hold Department executives accountable and ensure that some whom I felt were corrupt or abusive were removed from power. I also wanted to improve our communications with our members. We created a more fluid website, multiple Facebook pages, a Twitter account, email blasts and a mobile app. We still maintained our magazine as well, and we just changed the design and format to be more useful and current.

I also wanted to improve services to our members. We created our own insurance company and a discounted online uniform store, and we are still working on a firearm and equipment store and other services.

One of the things I am most proud of is our charity, the Star & Shield Foundation. When I joined the PPOA Board, we had little to no revenue for the Foundation and it was in disarray. We created many fundraising events over the years and now we have more money in the Foundation than ever before. This is important because this allows us to help members at their lowest point, when they need financial aid or when someone is killed in the line of duty.

Q: What didn’t you get to accomplish?

A: Many things. I am hopeful PPOA will still get them done even after I am gone. CCWs for our non-sworn uniform personnel, training for sergeants and lieutenants, which was approved in our contract, and better hiring and promotional processes, to name just a few. But I also realize there will always be something to work on, so I am not upset that there are things still left on the table.

Q: What are some of the big things you will remember about your time at PPOA?

A: There are so many. Our fight to protect our pensions, great contracts for our members — including the first time we ever negotiated something outside of contract negotiations, the Supervisory POST Bonus — and the violent death of Sergeant Steve Owen and what we were able to do for the family. But most of the things we did were the little things that nobody will ever know about. Some individual members may know some of the things. But I always liked that PPOA worked behind the scenes, worked with management to resolve issues and was able to negotiate and find common ground before they became issues.

Q: What are your thoughts about the state of the Sheriff’s Department today?

A: Scary. Dysfunctional. Abusive. But if you asked me that question four years ago, I would have said the same thing. If you asked me that 10 years ago, I would have said the same thing. I have worked with four Sheriffs during my tenure as PPOA president. Each one had the ability to be great and each one fell short, in my opinion. But they fell short for different reasons. Our current Sheriff, Alex Villanueva, had the perfect opportunity to fix things like cronyism, unfair discipline and terminations, low morale and a flawed promotional process. He has complained about these things his whole career, but now that he is in power, I don’t see a desire by him to fix them. In some instances, he has made them worse. That’s very disappointing. He has the same problem Jim McDonnell and Lee Baca had: The people around him aren’t telling him the truth, or he is not listening to them. Both are bad and the results are the same: bad decisions.

Q: What advice would you give Sheriff Villanueva?

A: I don’t think he is interested in my advice. Though if I were his confidant, I would tell him to open his perspective and recognize that there are many resources within the Department to learn from, not just his “inner circle.” He is now in a position to learn, not just lead, and through that process he would become a better Sheriff. I think he has the opportunity to be a really great Sheriff if he would just listen to people who are trying to help him, not those who are trying to help themselves. He needs to have an epiphany and change his current direction. If he doesn’t, he will go down as the worst Sheriff ever. Nobody wants that to happen. He doesn’t even realize that the best people to help him succeed are the very ones he has shunned, fired or gotten rid of. I can remember talking with Alex years ago about the abuses in the Department and how to fix them. We were on the same page. I don’t know what changed for him, but he better make some major adjustments and think more about leading like an elected official, as a servant of the people, and less like a king or dictator.

Q: What will you miss most after stepping down as PPOA president?

A: I will miss the people. First, I will miss the outstanding staff at PPOA. What a great bunch of people. They are truly the best. With the exception of some insurance folks who treated our members badly (they have all been fired), the PPOA staff is top-notch. They are hardworking, dedicated and service-oriented. I have seen other unions in the county and up and down this state, and PPOA is among the best out there.

Second, I will miss fighting for the members. I really think that was my passion. I didn’t always succeed, but I know there are many members who would otherwise have been harmed if PPOA wasn’t in their corner. I was successful because I always told the truth and mediated problems. Problem-solving and negotiating was the key. I knew I could pick up the phone and call any executive to resolve issues or offer solutions to a problem.

Q: What will you miss least?

A: The haters! There are a lot of folks who only care about themselves and getting promoted. There are those who will lie, cheat and steal if it improves their lot in life. They are despicable people and the sad part is they are cops. They post comments under anonymous names because they lack courage. They make up lies because they know they cannot be caught. I can’t tell you how many times I heard I was doing something just to get promoted. For 10 years, I have heard that. The reality is I could have been promoted many times over, but I chose to stay at PPOA because that is what I wanted to do. I wanted to fight to make the biggest difference in the lives of others. I was able to accomplish more as PPOA president than I could have accomplished as a captain, commander or chief. There is nothing wrong with promoting. I just enjoyed what I was doing at PPOA more than promoting. But these people will continue to hate, continue to make up lies about our new president, continue to spread rumors under pseudonyms and do all that they can to get ahead. Sad. I will definitely not miss these people.

Q: Do you have any advice for Tab Rhodes, our new president?

A: I have known Tab for a long time and I will advise him for many years, whether he likes it or not. But first and foremost, always do the right thing for the right reasons. It is easy to get caught up in the power and influence of the position. Just as I said about the advice I would give the Sheriff: Remember you are a servant and the members are your boss. You are not a king or dictator. Be respectful and humble and you will succeed. Fight for equality and fairness, not for what’s in the best interest of yourself or your friends. These sound like commonsense things, but in my experience seeing others in similar positions, it’s not so common.

I have total confidence in Tab taking over. I am also confident in the PPOA Board of Directors. I think this is a solid Board. Everyone is equal regardless of rank or classification. Nobody is afraid to speak up and voice their opinions, and everyone respects the opinions of others, even if that opinion differs from their own. That is what makes a great Board and great leaders, and that is the only way good decisions are made.

Q: You are the longest-serving president in PPOA’s 68-year history. What are your plans for the future?

A: I don’t really know what my plans are, but I want to stay involved with PPOA and continue to help provide service to the members. Maybe I will become a volunteer cook for their barbecue! (Editor’s Note: God help us! I like my burgers edible.) I care deeply about PPOA and about the Sheriff’s Department, District Attorney’s Office and Coroner’s Office, as well as the communities I have served over the years. As long as I can put my opinions on paper, I assure you the leaders of all of these groups will continue to hear from me! I have given up my position, not my passion!