Vicki Stuckey was unanimously appointed Tuesday night to fill the 18 months remaining on the term of Diane DuBois, who retired after 15 years on the Lakewood City Council.

Stuckey — who has lived in Lakewood for 28 years — has been a city commissioner for 19 years, served four years on the community safety commission and 15 years on the planning and environmental commission, including four stints as the commission’s chair.

She retired last year from the sheriff’s department, where she worked 34 years and rose through the ranks from a deputy to a sergeant, lieutenant and ultimately a captain and commander of the Altadena sheriff’s station.

“I think Vicki Stuckey is a great choice for serving Lakewood, especially at this unique point in our history,” Mayor Todd Rogers said in a statement released by the city.

“As we all know, Lakewood continues to diversify, and I think it is important that we have a variety of perspectives and life experiences represented at the highest levels of decision making …,” he said. “I think she can step right in and hit the ground running to effectively serve out the remainder of Diane DuBois’ seat at this important time for our city.”

DuBois had previously served 28 years on the city’s planning and environmental commission, making her the Lakewood resident with the longest combined service as a city official in Lakewood’s history.

Last month, she said she was “ready to retire, relax a bit and give someone else a chance to sit in this seat.”

On Wednesday, Stuckey said she is “honored and humbled to have this opportunity to serve my fellow residents of Lakewood.”

“I look forward to devoting myself to being the best council member possible, representing everyone in our community and working with my colleagues and fellow residents to keep our city in great shape and make it the best it possibly can be,” she said.

The City Council had the option of filling the vacancy by appointment or holding a special election in March 2021 that would have cost the city about $230,000, officials said.

When you shop, Amazon gives. In fact, Amazon will donate .5% of the proceeds of your purchases to the Star & Shield Foundation. These funds from Amazon Smile help the foundation support families of fallen officers and those truly in need. This is a simple way to contribute to a worthy cause every time you shop, at no cost to you. Shopping with Amazon Smile includes the exact same low prices and vast selection as the traditional Amazon.com store, with the added bonus that Amazon will donate a portion of your purchase price to our 501(c)3 foundation. CLICK HERE to help the Star & Shield Foundation truly make a difference.

Feb. 19: After a series of lengthy, frustrating delays, the county finally submitted the new salary contract MOUs for Units 614, 621, and 631/632 to the board of supervisors at their meeting on Tuesday. Members in those units will now see their increases (retroactive to October 1, 2018) as soon as the department processes them.

PPOA wants to ensure that all members make it home safely after celebrating and socializing during the holidays. The new PPOA “Steer Clear” program offers reimbursements to members of this association who use UBER or LYFT between Nov.19, 2018 and Jan. 2, 2019.
This reimbursement offer is limited to one round-trip or two one-way trips not exceeding 30 miles total.
If you plan to enjoy adult beverages this season, please do so responsibly. And if you’re not in condition to drive safely, make sure to use UBER or LYFT and email your receipt to info@ppoa.com (using your personal non-LASD email address) for reimbursement.
We appreciate all 9,000+ PPOA members and we want all of you to enjoy a safeand happy holiday season! 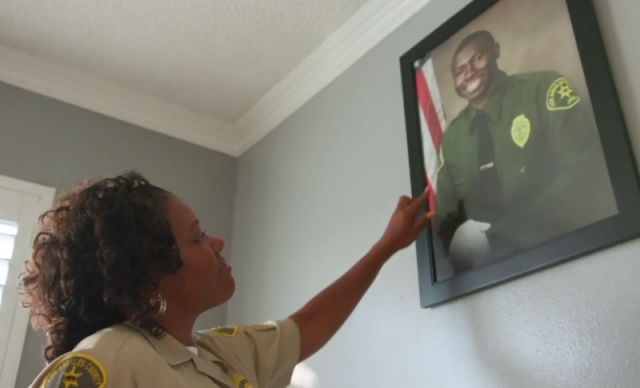 The vibrant life of Custody Assistant Anthony Thompson was cut short by a drunk driver on November 19, 2017. His mother, LASD Sergeant Ottawa Cureton, is passionate about Anthony’s legacy as she moves forward with equal parts strength and grace. PPOA was honored to capture Sergeant Cureton’s inspiring perspective on video in honor of the one-year anniversary of Anthony’s passing.

For many years, the Los Angeles County Sheriff’s Department has struggled with hiring sufficient sworn personnel. Last year, the department created a recruitment and retention task force; however, this task force has been ineffective. The department still struggles with hiring issues including: recruitment, department image, background process, polygraphs, medical exams, CA/SO disqualifications and many more. PPOA will be convening a task force of its own to address all these issues in hopes of providing recommendations and solutions to the sheriff and the county.
PPOA is looking for any LASD individuals, sworn or civilian, active or retired, who would like to participate in this task force. Our first meeting will be held October 3rd at 10:00 am at the PPOA office in San Dimas. If you are interested in participating, please email PPOA President Brian Moriguchi at bmoriguchi@ppoa.com.
Today, PPOA received word that the department has officially reduced the five-year commitment for patrol certified supervisors in Custody Division to three years. This is a welcome policy revision and has been a priority for PPOA representatives working with department management and the Sheriff to iron out details of the revision.
“The five-year commitment was excessive,” states PPOA President Brian Moriguchi. “We are pleased to see this new policy become official for newly assigned custody sergeants and lieutenants.”
Below is the policy revision announcement issued by Sheriff McDonnell earlier today: 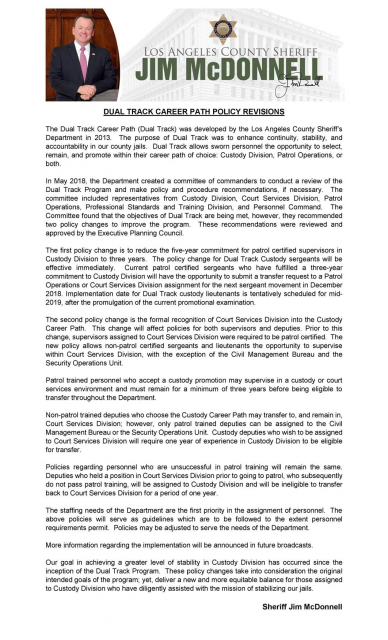 Attention PPOA Members:
For the past several weeks, PPOA and our legal team have been reviewing and analyzing our options regarding the county’s August 10, 2018 notification
of retroactive payments for the revised calculation of the regular rate of pay for overtime hours. This notification was based on the Ninth Circuit Court of Appeals’ decision in Flores v. City of San Gabriel. The Court held that “cashback” payments from health care plans had to be included in the overtime rate under the Fair Labor Standards Act (FLSA).
PPOA has thoroughly vetted filing its own FLSA lawsuit in federal court. PPOA has also reviewed a federal lawsuit that was filed on August 9, 2018 by The Public Safety Labor Group and Rains Lucia Stern St. Phalle & Silver, PC. It is our opinion that PPOA should attempt to negotiate a settlement with the county while the Public Safety Labor Group pursues litigation. This will give our members multiple options in this matter.
PPOA, therefore, will not be filing a lawsuit but believes our members should take the precaution of continuing to protect their overtime rights by joining the lawsuit filed on August 9, 2018 by The Public Safety Labor Group and Rains Lucia Stern St. Phalle & Silver, who are representing other Los Angeles County employees. Please note: You will not automatically be covered by the lawsuit unless you sign a document known as a Consent to Join that will be filed with the court.
Please go to https://www.laovertimelawsuit.com for detailed information regarding the lawsuit as well as instructions on how to file a claim. Any employee who has worked any overtime hours in Los Angeles County at any time since August 9, 2015, is eligible to join the lawsuit. This includes retirees who have worked overtime in the last three years. Any questions should be directed to the law firms referenced on the website:https://www.laovertimelawsuit.com.
PPOA will keep you updated regarding our settlement efforts.

Inmate Pleads No Contest in Attack on Custody Assistant

MyNewsLA.com  3/1/22 A jail inmate who was charged last year with punching a… Read More